You are here:
The Rock Coast Rollers

A few winters ago I would sometimes meet Leila Percy, whom I knew from my frequent visits to the Atlantic Baking Company, on her way from the Lincoln Street Center.  She’d been at roller derby practice, she said.  I was amused and intrigued that a sport I’d seen on television forty or fifty years ago — a rough, fast sport for women, one that never made the sports pages — was resurfacing in Rockland.  I admired Leila and her friends for spending winter afternoons practicing.  A few months later I attended the Rock Coast Rollers’ first public bout, at the Midcoast Recreation Center in Rockport.  It was exciting.  With the skaters’ consent, I started going to practices.  In the early winter I painted, by candlelight, a group portrait of three of the skaters:  Bristol Smashin’, Scarina, and Mistress of the Knife.

Roller derby is a new sport whose rules and patterns are changing.  It’s also spectacle, with elements of theater and dance.  It’s an arena that welcomes self-expression in dress, hair, skin, speech, and movement.  Most importantly, it’s a way women can be strong and fast and agile.

As delighted as I am by the social energy and implications of roller derby, it’s the physical and psychological and tactical concerns that have come to hold the most interest and urgency for me:  the way three or four women space themselves to promote their own jammer and impede the opposing jammer; the ways they use their hips, their shoulders, their arms, their legs; the ways they look at each other and at their opponents.  These are matters of bulk and finesse, of intention and wit, of shifting formations and opportunistic bursts of speed, which I have to treat and resolve as matters of mass and space, line and color.  It’s a joyous effort.

Over the course of a year I went to several bouts and lots of practices.  Nineteen of these women came to my studio to pose.  They gladly fit themselves into the compositions I’d laid out, but invariably they improved on the poses I’d sketched.  It was exhilarating, painting them, and enjoyable talking to them.  I love the variety among the skaters, in terms of personal style, background, occupation, and volunteer activities (one, for example, is a Girl Scout leader).  I admire their mutual openness, acceptance, and encouragement.  I admire their discipline and commitment, their organizational skill, their assiduous practice and also their awareness and inventiveness, moment by moment, on the track. 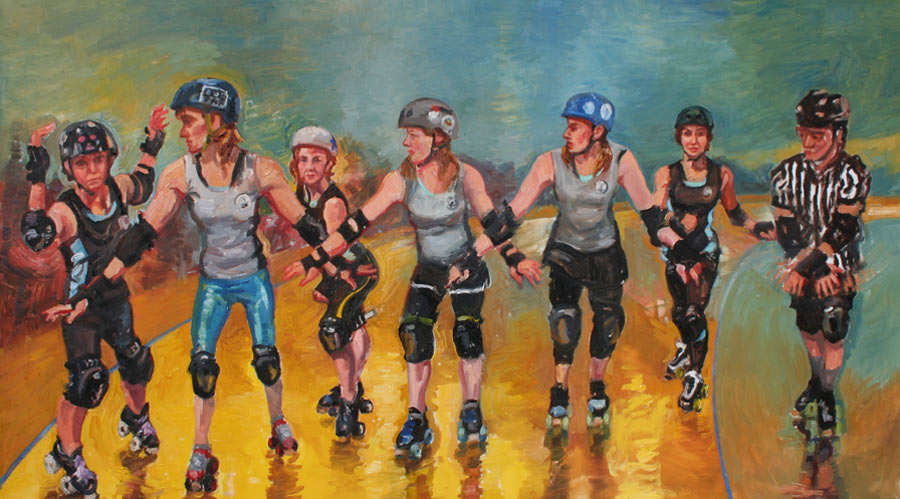 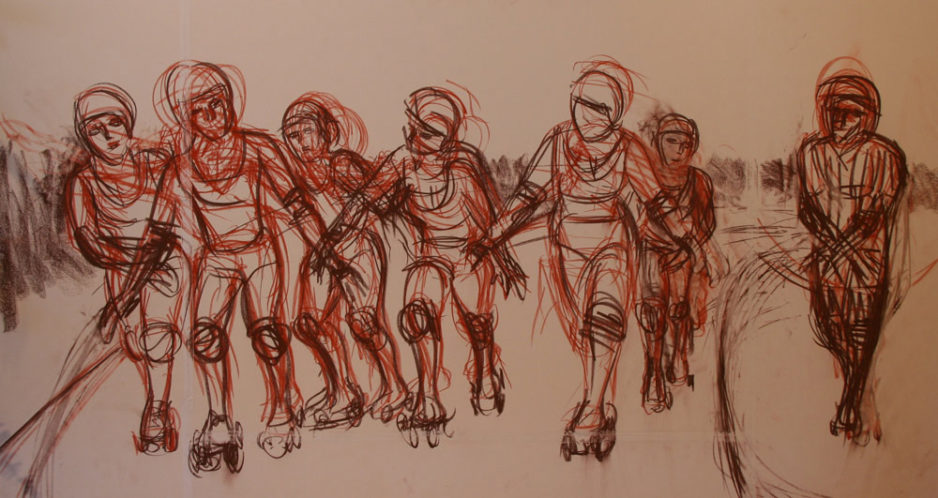