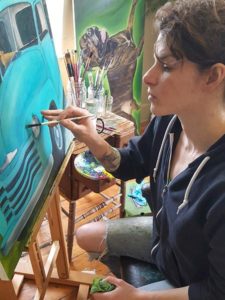 Mae Towers was born and raised in the small town of Fort Fairfield in northern Maine.  During her last year in a private high school she worked with fine artist Elizabeth Punches.

She has found her own way as an artist while working at a wide variety of jobs, from picking potatoes to cooking to working with Alzheimer’s patients.  In 2013 she created a series called “Louie the Neurotic Dog,” which has raised over $1,300 for animal rescue organizations.

Her love of animals is apparent in her current work.

“This year I have been expanding my painting subjects with chickens, and will anticipate doing more farm animals. Because of this change, I have recently teamed up with Peace Ridge Farm in Brooks, ME, an animal sanctuary for over 300 abused animals. I am so excited about working with this organization, as they are such a wonderful group of dedicated people. Please take the time to read about them!”   Mae

Lou Sapienza is CEO of North South Polar, Inc. and a founding member of the Fallen American Veterans Foundation, Inc.

As member of the Greenland Expedition Society WWII P-38 Recovery Team during the early 1990s he participated in three expeditions that developed the technologies and equipment that recovered a WWII P-38 Lighting fighter plane from 24 stories beneath the ice sheet surface. He served as the mission’s principal photographer, and his work was used extensively in the History Channel’s “The Hunt for the Lost Squadron.”

Lou has completed 6 expeditions to Greenland, three of them for the US Coast Guard and Defense Department. The expeditions have led closer to the discovery of a J2F-4 Grumman Duck amphibious biplane containing three heroic American servicemen who had been missing since November 29th, 1942.

Lou travels the world as a professional photographer.  His work has appeared in LIFE magazine, National Geographic, Forbes, Paris Match, and Gulliver (Italy), as well as numerous other international publications and corporate annual reports.

Sapienza is an elected member of the world-renowned, New York-based Explorer’s Club.

Jana Markwart-Sapienza was born in the East German town of Templin growing up in Fürstenwalde on the East German side of the Berlin Wall 10 years before its demise. Jana became a fully accredited registered nurse (Germany) but also developed a passion for world travel and photography. Jana specializes in landscape, critter and people photography. 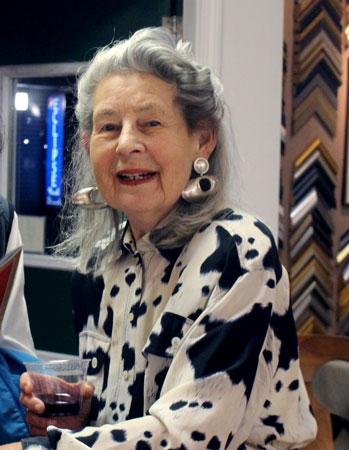 Barbara Beebe grew up on a farm in North Dakota, where she attended a one-room schoolhouse. “Each day in first grade, on my way to school, I passed by the blacksmith, pounding out plowshares with fire and hammer. This began my fascination with metal and jewelry, which I went on to study at the University of Minnesota.” As a child she fashioned dolls’ dishes from clay she dug on the farm, made toy furniture and snow figures, and drew her brothers and sisters on the scarce paper her mother found for her. Her first real art classes were in college.

She taught jewelry at Virginia Commonwealth University and elsewhere. Her jewelry was featured in Vogue and Accessories. In 1993 she was invited to create a silver cherub ornament for the Blue Room Christmas tree at the White House.

At her Civil War-era home on Friendship Long Island, Barbara cooks and heats with wood, lights with pitable place where she can do art. Some of these places have been nearby, and some have been quite far away: Oaxaca; Frigiliana, Spain; Umbria; Costa Rica; Normandy. At each place, her work has had a certain focus and taken on a certain, unifying character.

“The past thirteen years since I moved to Friendship Long Island have been the most creative years of my life. The beauty, simplicity of life, isolation, independence, and self-reliance make me create. My daughter, Susan, and I have restored an old house, planted gardens, created toy theaters with costumes and sets, written plays and set them to music, and performed these plays for children and adults. I’ve written short stories, built furniture of found objects, worked in clay, and created jewelry which I have marketed in major galleries. Now I am painting, and painting interests me the most.” 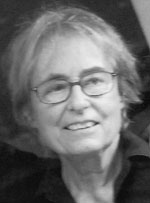 From her childhood in France’s Loire Valley (she was born there in 1938) and in Algeria, to recent residence in the western Maine town of Rangeley, the photographer Madeleine de Sinéty has lived a remarkable life. On a student visa, she spent six months in Iraq in 1958 following the overthrow of the monarchy. She has lived in a village in Uganda, followed a logger through Maine woods, and been a wedding photographer.

De Sinéty’s photography has an authenticity that comes from living with her subjects and, in many cases, taking part in their activities. She is present when an elderly French widow brushes her hair, Ugandan youngsters pound flour, or the sturdy Matt Lord twitches logs through the snow.

Two of her Matt Lord photographs are part of this exhibit.

“I began painting landscapes in gouache while also designing paper dolls (Leopold the Frog, Natasha the Ballerina and other fantastical characters) for B. Shackman Company of New York.  I began painting in oils again in 1999, helped by a private grant and a month at the Vermont Studio Center.  I began painting in the island woods, where encounters with birds and animals, from sightings to calls, began to blend my passions for wildlife – the life of my familiar woods – and for representation of the lights, darks, and complex visual pattern of the spruce forest.

All along, I’ve also been fascinated by the human face, and I’ve drawn and painted portraits whenever I could get someone to pose.” 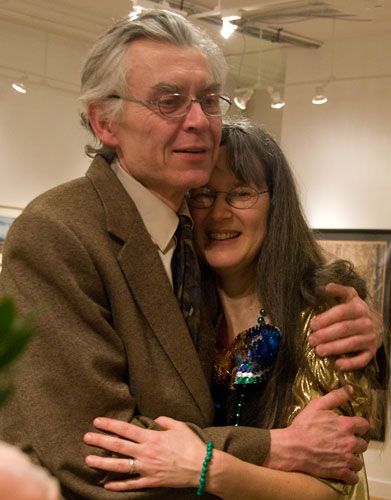