On Friday, August 3, from 5:30 to 8:00, the Jonathan Frost Gallery in Rockland will host the opening reception for a show of the work of three photographers:  Richard Barnett, Andrew Crane, and Tillman Crane.  All live in this area, and all use time-honored, hands-on darkroom techniques.  Carl Root will play the piano at the opening.

Richard Barnett has been a commercial and fine art photographer for over twenty-five years, though he traces his connection to photography to a twin lens Brownie he received as a child.  In this exhibition he’ll be showing photographs of old tools and of two formerly grand industrial sites, one in Camden and one in Wiscasset:  the Knox Woolen Mill and the Wiscasset Power Plant.  About the Knox Mill he writes:

“The timber framing echoes the same Maine skill and artistry that produced strong, beautiful schooners; the machines, cast iron monoliths, show a subtle Victorian grace in the curve of a frame or the detail of a spoked wheel.” 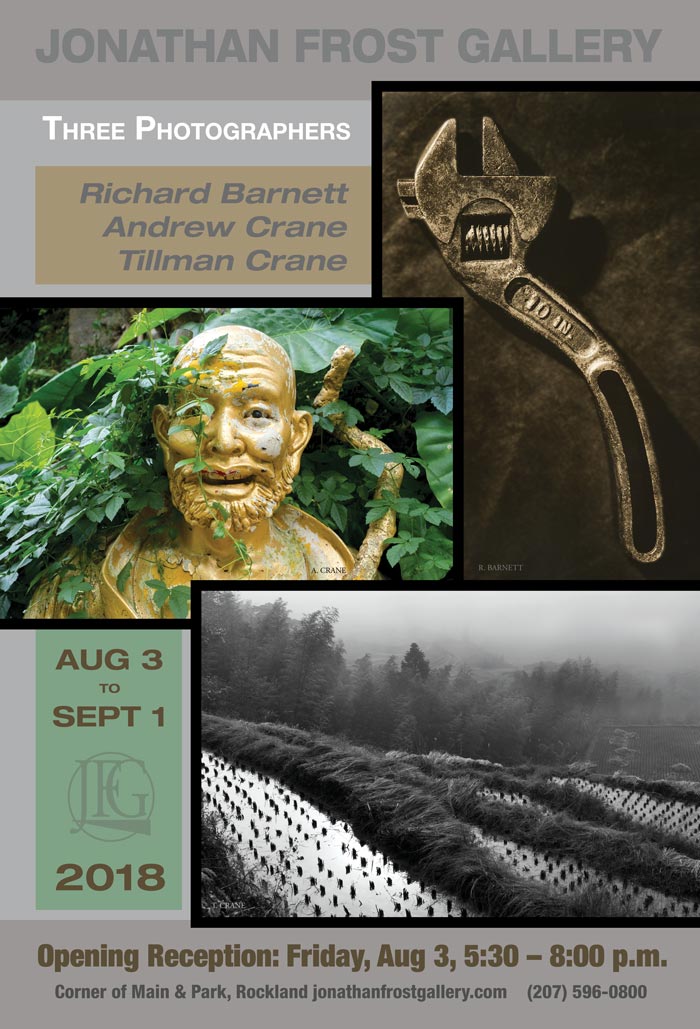 Andrew Crane says he’s been “in and out of the darkroom” since he was a boy.  He’ll be showing gum bichromate prints of China.  Gum bichromate printing is the earliest process used to create color photographs.  Some of these prints have as many as fifteen layers of color, each layer requiring special coating, exposure of the negative, and drying before another layer can be placed over it.  About China, Crane writes:

“Here and there, like cracks in the pavement, history slips in and out, reminding you of what lies beneath the surface; I sought out pockets of stillness and in these found remnants of the past that had been left behind in all the hurry.”

Tillman Crane, Andrew’s father, photographs quiet spaces in architecture and landscape.  His photographic investigations have led him near and far, to the locks of the Erie Canal, the standing stones of the Orkney Islands, the banks of the Jordan River, and – six times – to China.  He has produced large bodies of platinum prints, has shown extensively, and has published four limited-edition books.  He has also long been a mentor to other photographers.  Platinum prints are known for their archival stability and their unique look, with a matte surface and a more gradual range of greys than, say, silver gelatin prints.